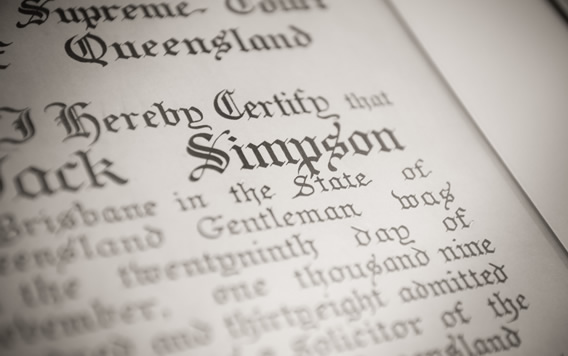 Grant & Simpson Lawyers have been serving members of the Central Queensland region with their expert legal advice and services for a period spanning across three different centuries.

The firm was founded in 1897 when Hugh Grant joined Robert Brumm in the partnership of R A Brumm and Grant. Hugh Grant was just 24 years of age when he became a Partner and he practiced for a further fifty-eight years until his death on May 13th, 1955, at the age of 82. The Grant legacy has been carried on through a further three generations of Grants practising under the family name.

During World War II, both Jack Simpson and Colin Grant were called upon for service. Whilst they were serving, Hugh Grant continued the practice of Grant & Simpson, which included him visiting Wowan on the weekends. Jack Simpson supervised the Wowan branch until 1981, when it was closed after Jack himself retired at the end of that year, aged 65.

Both Jack Simpson and Hugh Grant saw the rise of many young promising solicitors, taking many under their wings as they completed their Articles of Clerkship and continued on to become current partners of the firm. Stephen Robert Smith joined the partnership on the 1st May 1983 after completing his Articles under the guidance of Jack Simpson. Ross Edward McLellan was next to join the Grant & Simpson partnership on the 1st July 1986. Allan Donald Grant, now Managing Partner, became the fourth generation Grant to be involved in the firm when he commenced his Articles under the guidance of his father, Hugh Grant in 1980. He went on to become Partner on the 1st July 1989. John Francis Siganto completed his Articles with the firm under Stephen Smith and became partner on the 1st January 1997.

Ian Edward Haig also completed his Articles of Clerkship with Grant & Simpson under the guidance of Hugh Grant before branching out on his own. He rejoined Grant & Simpson as a partner on the 1st January 1997 with the merging of his Emerald office, Ian Haig & Partners and Grant & Simpson. This was for the dual purpose of expanding the firm’s ability to service clients throughout the wider Central Queensland district and utilising Ian’s highly valued experience. Ian relocated to Rockhampton and serviced the firm’s western clients, until his retirement in 2013.

Throughout its long history, the firm has operated from offices at Rockhampton, Emerald, Mount Morgan, Wowan and Yeppoon. From their current offices in the old Primac Building at 226 Quay Street, Rockhampton, the partners provide a range of legal services that are both efficient and cost effective. The firm continues to offer quality advice and assistance over a diverse range of legal matters and prides itself on developing personal client relationships and offering a practical and sympathetic approach to clients’ problems.